This fulfilling section combines plenty of history, culture and heritage for enquiring minds. From Omau or The Cape as it’s known locally, make the most of the surrounding native forest and lake views. As you head downhill towards Williams Gully and onto Tauranga Bay, stop to take in the spectacular views across to the Paparoa Ranges and on a clear day Aoraki / Mount Cook.

This fulfilling section combines plenty of history, culture and heritage for enquiring minds. Abel Tasman first sighted the Cape in 1642 and named it Rocky Point, but it was later named Place of Foul Winds by Captain Cook when his ship was besieged by gales in 1770. Māori knew the Cape as Tauranga which refers to the sheltered anchorage the bay provided for their voyaging Waka (canoes).

The Buller District has a compelling history, from ancient Māori Pounamu Trails, gold mining, and coal mining more recently. Granite from the disused quarry nearby was also used to develop the Westport Harbour. This fascinating history combines with spectacular scenery, diverse ecology, and rock formations providing a window into the geological past.

Once the gold rushes subsided, the pioneer development of the West Coast depended very much on the logging of native forest. Early 20th century timber milling saw the Bowater & Bryan Mill established. It was the first timber mill at Cape Foulwind.

From Omau or The Cape as it’s known locally, make the most of the surrounding native forest and lake views. As you head downhill towards Williams Gully and onto Tauranga Bay, stop to take in the spectacular views across to the Paparoa Ranges and on a clear day Aoraki / Mount Cook. Pause for breath here and meet the locals. From the Tauranga Bay end the path leads to the rookery of Kekeno, the New Zealand fur seal. For an extra adventure follow the track along the coastal bluffs to the iconic Cape Foulwind lighthouse.

The headland is an important site for the Seal colony as well as the Sooty Shearwater, a large sea-going Petrel, and also Blue Penguins. This location is also home to the largest population of seabirds from Farewell Spit to Milford Sound. The disused cement works are located close to the Cape, and took advantage of the abundant limestone, sand and clay in the immediate area.

The Cape Foulwind Railway was constructed by the Westport Harbour Board to cart rock for breakwaters, and eventually flax, timber, farm and domestic supplies as well as passengers. In total the railway was 24.3 km long and over its years of operation carted 1.2 million tonnes of rock, some weighing 20 tonnes. Curves in the line between the Kawatiri River and Omau resulted in some blocks falling from the train. You can see these today, sitting in farm paddocks, with some utilised for landscaping along the Trail.

The quarry operated by Holcim at Cape Foulwind near Westport was in operation from 1958 to 2016, producing 900,000 tonnes of limestone and marl annually. The giant quarry trucks historically lumbered back and forth to the factory using the line of the old Westport-to-Cape-Foulwind railway. A restoration project has seen the 150-hectare quarry become a stunning azure lake, surrounded by native forest and wetland with almost 1 million trees planted.

This Section of Trail passes through native plantings and Podocarp forest dominated by Rimu. Discover the small dam and waterway, where in Spring Whitebait and Elvers (juvenile eels) wriggle up sheer cliffs from the sea to make their way into this habitat. Rich birdlife includes Bellbird, Tui, Grey Warbler, Fantails, Silvereye and Kererū. In future with predator numbers reduced, it’s hoped to reintroduce Kiwi to the forest. 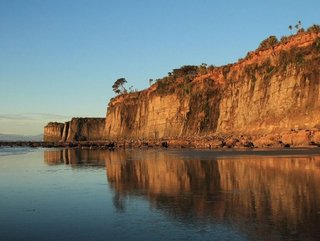 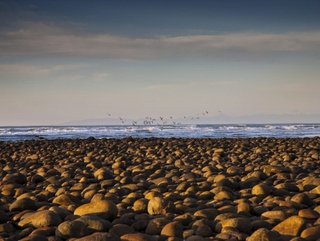 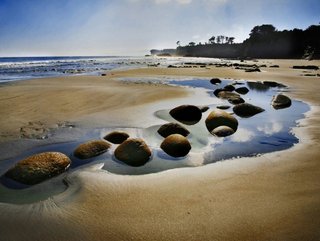